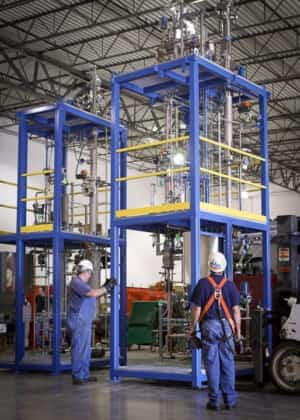 Ready to talk to an EPIC engineer about your industrial distillation equipment project? Call 314-714-1580 or contact us.

View more distillation systems and plants in our photo gallery

View more distillation systems and plants in our photo gallery

Each of EPIC’s distillation systems is custom-built to the customer’s specification and therefore, the price can vary. To get pricing information or discuss your project with an EPIC engineering specialist, please call 314-714-1580 or fill out the form below.

EPIC has designed distillation applications for a variety of industries including alternative energies, ethanol, food flavors, an many more. Select a case study below to learn more about EPIC’s industrial distillation equipment capabilities.

A two-part design was developed for an ethanol extraction system that needed to fit into a small space as part of EPIC’s turnkey responsibility process.  Overall project timeline shortened due to on-site upgrades and skid fabrication progressing in tandem. The finished “plug and play” skid was delivered as two separate framed pieces to the client site and successfully navigated to the installation spot. Continue to the Innovative Distillation Skid Design case study…

EPIC designed and fabricated a stainless steel vacuum distillation system for a liquid flavors company in the food and beverage industry. The client needed to scale up the production of an existing batch distillation process of a proprietary liquid flavor that had seen a spike in popularity. Process engineers at EPIC worked closely with the customer – who could not provide an original P&ID – to design a larger, improved version of the original vacuum distillation system.

EPIC specializes in delivering turnkey distillation systems. Our services include:

EPIC has a plethora of resources on this topic including a distillation equipment and processes pdf, blogs on best practices, and more. Click the links below to learn more.