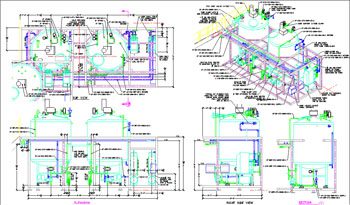 EPIC was invited to bid on the process system development of a deodorant manufacturing facility. An additional engineering firm completed the original project front-end engineering, but their fixed bid dramatically increased from the original estimate due to project inefficiencies. EPIC took over the project after it was two months behind schedule.

EPIC won the competitive bid due to an innovate project engineered solution. This included a fast track design basis, modular process plant approach that completed the project on time and within budget. EPIC’s engineers re-worked the original design to eliminate unnecessary scope and out-dated technologies and suggested the use of load-cell technology in the batch-mixing process.

Modular fabrication allowed the client to build out its new process plant off-site into portable skids while it continued on with the field installation efforts (civil, site utilities…), drastically reducing project timeline. Modular fabrication required less man-power, saved time without weather delays, and completed the project on the aggressive timeline. This was critical due to the highly union area & difficult winter working conditions.

EPIC managed the entire project from the design stage through the final process plant startup. We completed the re-design and area classification studies to simplify the process plant design before bidding the final package.

The redesigned plans were used to specify the correct instrumentation and equipment, including the tanks. The client allowed EPIC to purchase the equipment, speeding up the project and allowing for seamless transition. The direct management of equipment procurement led to better coordination of purchasing and project schedule, allowing EPIC to guarantee a faster completion date.

Modular fabrication of the raw material and batch mixing skids was completed at the EPIC manufacturing facility. Nine large bulk storage tanks were assembled with required piping, to hold the chemical building blocks for the products. Pipe bridges to bring chemicals into the plant for the batch mixing system were 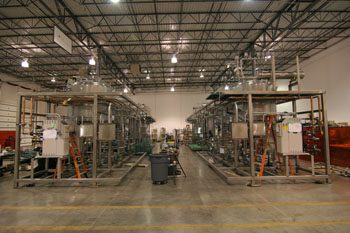 Six mixing modules to mix multiple types of deodorant, and which formed the majority of the process plant, were fabricated at EPIC. We designed the high viscosity liquid to move through jacketed piping to regulate the chemical temperature, depending on product requirements. Necessary sanitary piping was installed, meeting GMP and 3A requirements.

EPIC designed a combination batch mixing and reactor system to produce multiple forms of deodorant. The turnkey batch mixing systems purpose was to combine basic chemicals, such as water, alcohol and silicone to form some of the products. For products requiring oils and solvents, the batch reactor system served to apply heat and pressure generating a chemical reaction that binds the ingredients.

Scrap-blade agitators in combination with counter-rotating high sheer mixers in the mixing tanks were specified to keep the product from sticking to the sides of the tank as it is mixed.

EPIC also handled the relocation of the packaging line equipment for the client.

EPIC shipped the entire project by truck to the job site after the skids and processing equipment had been assembled at EPIC. When the project left EPIC it was mostly complete, including wiring ring-out completed, with only the onsite installation remaining. EPIC installed all three process systems to coincide with the packaging relocation for each product, hitting three very specific windows of opportunity to keep both projects on schedule.

After installation was complete, EPIC remained onsite for validation and startup, including operator training. 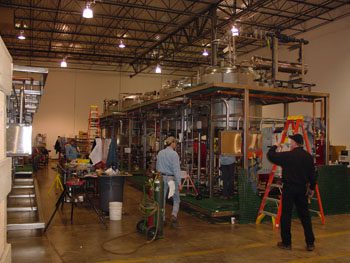 Find a solution that is right for your company. Contact EPIC or learn more about batch manufacturing systems or modular process systems.