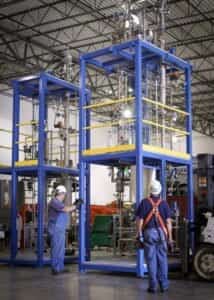 During our proprietary Front-End Engineering (FEE) stage, EPIC reviewed the client provided lab-scale testing data and piping and instrumentation diagrams (P&ID’s). EPIC collaborated with the client to find the correct distillation system layout and made necessary changes to the provided P&ID’s.

A two-part design was developed after the initial visit, allowing the system to be split into two independent skids for installation. The system appears to be one seamless skid when fully installed, but can be separated into two independent parts with a few minor changes. Column diameter and height, piping locations and equipment placement were carefully planned for the space and dual-skid parameters.

Distillation scaleup & modeling were completed by EPIC’s expert distillation consultant, Terry Tolliver. Skid design and layout was finalized by EPIC’s project manager based on the modeled process and experience with similar projects. A Finite Elemental Analysis (FEA) check was performed by an independent source to confirm the skids ability to bear load and stress, especially during installation.

EPIC made the following recommendations during FEE and detailed distillation column design:

Reflux loops are used in both columns to cycle the mixture through several intervals. This creates a higher concentration of ethanol in the condenser at the end of the process. A 91% ethanol mix is the final product. Both columns operate under a vacuum to lower the temperature requirements and use less energy to achieve separation.

The distillation module was fabricated and assembled in the EPIC Fabrication Shop. This ensured the skid was assembled under ideal conditions, the project was kept on timeline and construction costs are reduced. Off-site skid fabrication prevented onsite upgrades and skid fabrication from interfering with each other. The time required to build the skid and OSHA exposure hours were both greatly reduced, saving the client money. These are the major advantages that modular design brought to this distillation project.
The client provided their own control system for the skid that EPIC integrated with an experienced automation engineer. EPIC functionally tested all equipment before shipment. The distillation system is a Class 1 Division 1 system. The frame was made of carbon steel in EPIC’s carbon shop, painted, and transferred to the stainless shop where all the piping, tubing and equipment and instrumentation was installed. Hydrotesting was completed on the entire system to double check for leaks and verify the vacuum in the columns.

The client completed three walkthroughs of the skid during fabrication/assembly. On the final walkthrough, a P&ID check was performed.

The finished “plug and play” skid was delivered as two separate framed pieces to the client site and successfully navigated to the installation spot. The two pieces were re-united and start-up was successfully completed.

A process design firm helps you design, fabricate and integrate an appropriate process solution that improves your manufacturing process. EPIC believes we can help you “Do It Better” by:

Fill out the form below to get a free consultation with one of EPIC’s Process Engineers: